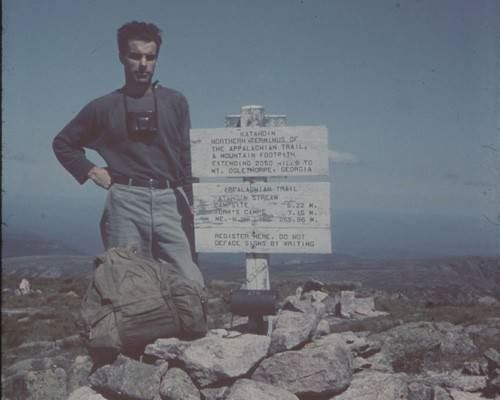 Famous People on the Appalachian Trail

The Appalachian National Scenic Trail, or simply the AT, is a hiker’s Mount Everest. The 3,510 kilometer (2,181 mile) trail stretches from Georgia to Maine. While some people hike the AT in sections over many years, those known as thru-hikers attempt to complete the entire trail in a single season, a commitment that takes five to seven months. The AT is the world’s most famous long-distance hiking trail, but many of its hikers are also well-known — some for their trail exploits, others for their inspiring stories of courage and accomplishment. Here’s a look at a few of them.

Earl Shaffer was the first person to walk the AT in one continuous hike, a feat that the Appalachian Trail Conference believed to be impossible. After completing his service during World War II, Shaffer said he wanted to “walk the army out of [his] system,” and he began his hike at Mount Oglethorpe, Georgia, on April 4, 1948. There were no guidebooks for the trail, so Shaffer set out with just roadmaps and a compass, and averaging 16.5 miles a day, he reached Mount Katahdin 124 days later. The moment was bittersweet for Shaffer who wrote, “I almost wished that the Trail really was endless, that no one could ever hike its length.” In 1965, Shaffer hiked the trail again – this time starting in Maine and hiking to Georgia, making him the first person to complete a thru-hike in both directions. Then in 1998, at the age of 79, he hiked the entire AT again. Believe it or not, there have been older thru-hikers: The record is currently held by Lee Barry who finished his fifth AT hike in 2004 at the age of 81.

On March 6, 2010, 45-year-old Mike Hanson set out to hike the Appalachian Trail, and seven months later he completed the more than 2,000-mile trek. What makes his hike so special? He’s completely blind. Hanson spent years testing a special GPS receiver that would guide him to campsites, water sources and other points, and he chose to hike the AT to demonstrate the value of adaptive technology, as well as “the competence and independence of persons with visual impairments.” Hanson says the toughest part of his journey was the mile-long boulder field across the Maine border: “You go over, under, around and between boulders for a mile. If I ever do that again, it will be too soon!”

Many men and women have attempted to be the fastest AT thru-hikers, but the record is currently held by Andrew Thompson, who completed the trail in just 47 days, 13 hours and 31 minutes in 2005. A veteran hiker, it took Thompson three attempts to beat the previous record, and he averaged more than 72km per day. In his successful run, he started the trail in Maine to get past the most difficult terrain first, and by the time he ran across all 14 states, he’d lost more than 35 pounds. The women’s record for fastest thru-hike is held by Jennifer Pharr Davis who completed the AT in 57 days, 8 hours and 35 minutes in 2008.