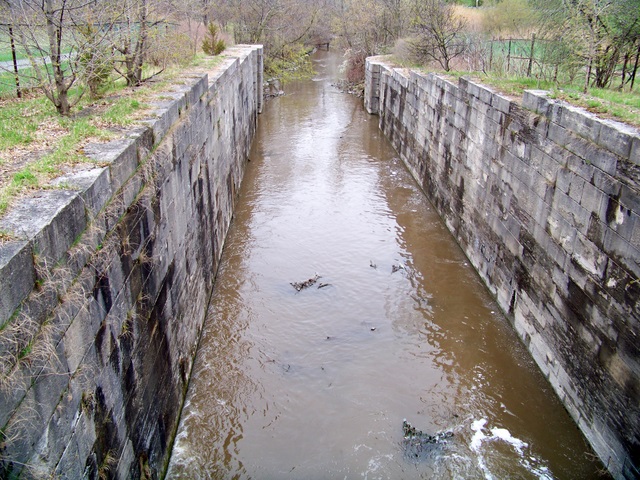 Most people living in Ontario area are familiar with the Welland Canal. Running from Lake Ontario to Lake Erie, it’s one of the largest canals built in the world and allows large ships to move between the Atlantic Ocean and cities such as Detroit and Chicago. A canal was needed to bypass Niagara Falls. What few people know is that the current canal is actually the fourth in a series of canals built between the lakes.

First canal was made entirely of wood and was completed in 1829.

After 12 years of operation the canal was purchased by the government with plans of rebuilding. The infrastructure of the new canal was built with stone, the size of the locks increased and the number of locks reduced. While the second canal followed the route of the first canal a few winding sections were straightened out to allow larger ships to pass. Work on the Second Welland Canal started in 1842 and was complete in 1845.

The first and second canals, however, were never built to handle the bigger and more modern steamships being used on the lakes in increasing number. Plans were drawn up to build a much larger and straighter canal out of stone that could be crossed with much less time and effort. The Third Welland Canal opened in 1881.

If it wasn’t for the ever expanding size of ships traveling on the Great Lakes the Third Welland Canal may have been in service for a much longer period of time. As it was, only a few years after finishing the Third Canal thoughts of a still larger canal arose.

The fourth canal more than doubled most of the proportions of the third. It also attempted to make a straight-line crossing from Lake Ontario to Lake Erie. The fourth canal was an enormous project taking years of planning. Construction started in 1913 and was completed in 1933.

The last important modification on the Welland Canal happened in 1973 by straightening out a portion east of the city of Welland.

So what happened to old canals and how much of them are left? Although obsolete and no longer in use, most of the structures still remain.

The first canal was directly incorporated into the second canal, but a few small stretches remain along with a couple of preserved locks. The second canal has remained mostly intact with most locks still visible and about half of the third canal infrastructure has remained.