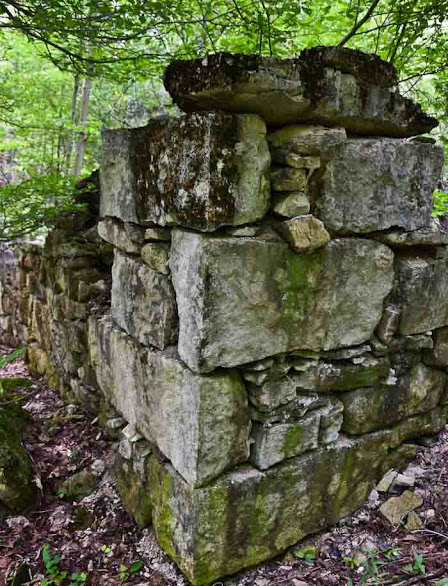 You won’t find Silent Valley on Google Maps. It’s a diverse 200-acre swath of land in Ontario with enough history, geology and hiking trails to inspire a book. Spectacular caves, ancient fossils, pioneer farm remnants and an airplane crash site are easily viewed on a day hike through the valley.

The area was acquired by the Wilsons from Scotland in the late 1860s. They erected a couple of cabins and a massive barn of hand-cut and layered stone measuring 92 by 62 feet then farmed the land for four generations. The remnants of the barn walls and the hand dug well are still in good condition and are easily visible from the trails. In 1904 the land was sold to the Frizzell family and in 1967, it was purchased by Hallman Lumber. Finally, in 2013, it was purchased by the Bruce Trail Conservancy to preserve the land for present and future generations.

Ancient fossils can be seen in the boulders of the farm’s barn walls, reminding us that the area was once a shallow inland sea.

Another area of interest is the wreckage of an old Cessna 205 that crash landed in the forest on Sept. 26, 1970. The plane, travelling from Toronto to Griffith Island, was caught in weather so severe that it began to come apart in mid-air. All four passengers of the plane died in the crash and the scattered wreckage has been collected into a memorial.

Towards the west, huge sculptured boulders indicate that enormous amounts of flood water rushed through the valley shortly after the last ice age 10,000 years ago. The system of caves and crevices is the result of massive rocks separating from the escarpment face by thousands of years of freezing and thawing. Over the past year hiking trails have been developed for the public to get into and see these features as well as providing access to the Bruce Trail. It is a very unique property.

After glacial scouring, upheaval, farming and industrial tree harvesting, the land is once again at peace. Silent Valley is a place of cultural, geological and biological diversity that invites hikers and historians to explore.