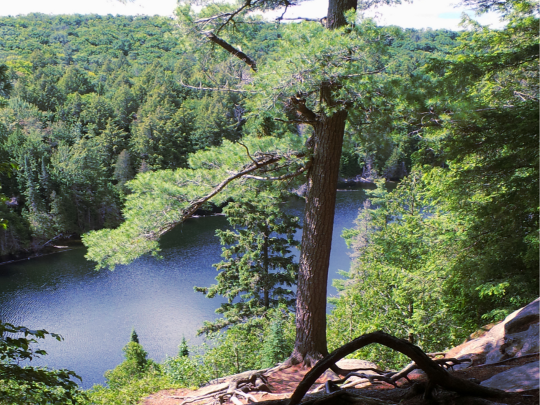 Algonquin is Ontario’s first provincial park Ontario along with being one of the largest. It protects a variety of natural, cultural, and recreational features and values while offering a diverse experience to visitors. The essence of Algonquin is in its vast interior of maple hills, rocky ridges, and thousands of lakes. Exploring this park can only be done on foot or by canoe; enjoying it must be done quietly.

For most of Algonquin’s history, human settlement was not a very important element. Scattered family groups of aboriginal peoples came to fish, hunt and pick berries, but their numbers were never large. It was not until the 1800s that big changes came to the rugged Algonquin highlands.

Pioneer loggers pushing up from the Ottawa Valley reached Algonquin in search of the great white pine trees whose prime wood was increasingly in demand by an expanding British economy. Living in remote, primitive camps, they felled and squared the giant pine, and when spring came, drove them down swollen rivers to the Ottawa River and the outside world. The story of that colourful era and subsequent logging in the Park is told at one of Algonquin’s two museums, the Algonquin Logging Museum, located near the East Gate.

Algonquin was established in 1893, not to stop logging but to establish a wildlife sanctuary, and by excluding agriculture, to protect the headwaters of the five major rivers which flow from the Park. Soon it was “discovered”, at first by adventurous fishermen, then by Tom Thomson and The Group of Seven, and a host of other visitors who came by train and stayed at one of Algonquin’s several hotels.

Of all the living things that inhabit the present day Algonquin Park, none are more important than plants. Plants almost completely blanket the landscape of the Park; they have an overwhelming influence in the lives of other organisms such as animals and fungi; and in form and colour, they are profoundly pleasing to the human eye.

Yet in spite of all of this, the plants of Algonquin are very often taken for granted. Except for the beauty of the Park’s wildflowers, or during the peak of fall colours, many people pay hardly any real attention to our plants and as a result, are unaware of just how interesting they actually are. Many people fail to realize, for example, how the beautiful Pitcher-plant of our Spruce Bogs, has adapted to living in a nutrient poor environment by capturing, drowning, and digesting insects to increase its intake of nutrients like nitrogen. Other people may not understand the incredibly complex relationship between flowers such as the Pink Lady’s-slipper and the insects that are responsible for pollinating them.

Mid-September to mid-October is usually the peak of the canopy colour in Algonquin Park created by the sugar maple trees. There is usually a two-week high peak season that varies from year to year depending upon environmental conditions and the area of the Park.

In the animal kingdom Algonquin is unequalled in Ontario, perhaps even in North America, as a location for seeing moose. These huge animals are attracted to roadside salt left after the winter sanding operations.  The park is home to fifty-two other species of mammals including some fascinating creatures that visitors hope to see:  White-tailed deer, beaver, black bear, and wolves usually top the list. Public wolf howls take place on Thursday evenings in August whenever weather and accessible wolves permit. The other species, although common, are usually more difficult to find in Algonquin’s heavily forested terrain.

Anyone who takes a walk in Algonquin, in any season, will see a variety of fungi. During the summer and fall, brightly coloured, umbrella-shaped mushrooms, candelabra corals, and puffballs may add delight to a woodland walk. The spring brings its own special mushroom season, starring the morels and false morels. Familiar and yet unknown, fungi are everywhere and are an immensely important and extremely fascinating group of organisms. Every day we see them, walk by or on them, and even breathe and eat them (whether we want to or not), yet most of us know little about them.

Algonquin Park is larger than Prince Edward Island, Canada’s smallest province, and about the same size as the US states of Delaware and Rhode Island combined.